Peaceful protesters that stayed overnight on Sunday, in Chisinau center, were violently evicted by the police on Monday morning so that country’s senior officials could celebrate Independence Day. 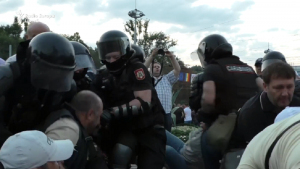 After the protesters had been forcefully evacuated in the early hours of the morning, the police also brutally evacuated the group of citizens that had been protesting in front of Guguţă café (the Occupy Guguta movement).

Hundreds of policemen stormed the center of Chisinau, taking away a tent and other personal things belonging to protesters.

The policemen did not explain from whom they had received the order to act in such manner. As for the protesters that had been evacuated from the monument of Stefan the Great, the police presented and order signed by the interim mayor Ruslan Codreanu.

Among those violently evicted were the political leaders Maia Sandu and Andrei Nastase.

Efficient, natural and easily assimilated. Poultry protein concentrate can be the key to your farm’s success

To get the best results from raising animals, we need to make sure that we give them the best nutrition…

Proper nutrition is the basis of a dog’s health and performance, which is one of the main concerns for a…