The Moldovan authorities decided to suspend the trial regime for the cars registred in Transdniestria, when crossing the state border. The decision comes into force starting from the 20th of January.

„The information collected from the competent authorities during the last 10 days will be analyzed according to the traveling demands to Ukraine and the number of demands from Transdniestrian drivers to obtain the neutral registration plates. Further decisions will be taken after basic analysis and will be announced”, according to a Government press release.

Worth mentioning that on Friday the separatist authorities from Tiraspol have decided that from the 24th of January all cars with Moldovan registration plate won’t be able to pass the Moldovan-Ukrainian border. The so-called Ministry of Foreign Affairs from Tiraspol declared that the decision is a response to the Moldovan authorities, which have forbidden, from the 10th of January, the border crossing for the cars with Transdniestrian registration plates.

The secessionist regime from Tiraspol announced that this restriction will be available until the Moldovan authorities will cancel their decision.

Prime minister Ion Chicu announced that starting from the 1st of April, Ukraine will not allow entering the country for the cars that have Transdniestrean registration numbers.

„Chișinău does not use such words as „blackmail”. We have offered our citizens from Transdniestria the possibility to register their cars with neutral numbers, so that they could access third countries. However, only a few of the citizens from the left bank of the Dniester did it.

We were notified by our colleagues from Ukraine that from April 1st they will not allow the entry of Transdniestrian cars with old numbers into the country. Respectively, we conducted a test for 10 days to see what would happen if the cars would not pass. This deadline expires today and the issue is being resolved. We will see what happens after April 1st, when our colleagues from Ukraine will not allow our citizens from the left bank of Dniester to circulate with old Transdniestrian numbers. There is no blackmail or surrender involved. It’s just a coincidence”, he said. 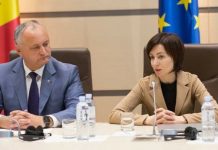